Sarcoidosis Awareness Month Was a Smashing Success! – Find Out the Winner of the National Quiz! 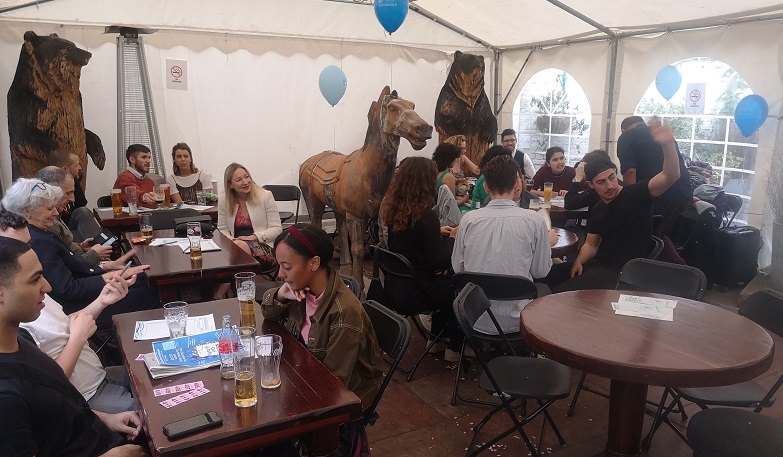 SarcoidosisUK and our community have been celebrating Sarcoidosis Awareness Month throughout April. We have had lots of exciting events to help raise the profile of the condition and to raise more funds for important research.

Sarcoidosis Awareness Month was a smashing success, raising over £15,000! This could not have been done without our amazing community who not only did events for us but also raised tons of awareness. Read on to see a full summary of everything that happened throughout April.

We kicked off Sarcoidosis Awareness Month with ‘The iD Project’ exclusive screening in London’s West End. The film was directed and produced by new Sarcoidosis Trustee Richard Etienne, who’s father sadly passed away from sarcoidosis.

The film and Q&A was live streamed to the SarcoidosisUK Facebook page where they were watched by thousands of people online.

The event was a fantastic way to celebrate the life of Richard’s father and raise important awareness of sarcoidosis.

The film has been submitted to various film festivals – if you missed out then you can catch it later in the summer!

The SarcoidosisUK Annual National Quiz 2019 was a splendid success!

Four quizzes were held across the UK throughout the month – firstly in Cornwall, then London and Scotland and finally Bristol.

Overall the quizzes and raffles raised over £3,300! This will be doubled by our research partners and invested into research into sarcoidosis, resulting in £6,600 of research funds.

Also, congratulations go out to ‘The Badgerinas’ team from Bristol who scored an astonishing 88.5 points and so has been crowned the SarcoidosisUK National Quiz Winners 2019!

THANK YOU to everyone who came, donated and particularly to our amazing quiz organisers – you are all amazing!

The charity does as much as it can in order to raise funds and awareness, but it is truly spectacular when we get the support of the community. There were some amazing fundraisers for SarcoidosisUK during April – all wearing SarcoidosisUK colours and raising crucial awareness for the condition.

The Virgin Money London Marathon is one of the biggest and most important events of the year.  With the charity unable to get an official charity place this year we were so blessed to have so many people raise money for us 2019. This includes Steve Renshaw (a Respiratory Clinician), David ‘Eddie Mills (a Patient) and Zuelika Brett (a Family Member). It was amazing to see all these people representing the charity and managing to raise almost £3,000 which has resulted in an amazing £6,000 to be invested into research for a cure.

However, aside from the Virgin Money London Marathon we also had other fundraisers doing astonishing work, promoting awareness and raising money for the charity.

We are so grateful to you all for taking an active position in helping us to find a cure to sarcoidosis.

It is very important to the charity that you understand where all the money from your donations are going. This April we were able to fund new research from your generous donations from the 20일 Anniversary Campaign donations. SarcoidosisUK is very excited to announce funding into a clinical trial for the antibiotic Azithromycin at the University of Hull.

Researchers will be testing the medication to analyse its effectiveness in reducing mTOR activity in sarcoidosis patients. Dr Simon Hart his team will be conducting the £60,000 trial throughout 2019.

Furthermore, SarcoidosisUK is also interested in learning more about how sarcoidosis affects you and other people differently. We desperately need to know more about sarcoidosis – so little is currently known. Your help filling in SarcoidosisUK Big survey will help us build up a better understanding of the disease. In order to accomplish this SarcoidosisUK created and promoted the Big Survey, gathering vital information that can help us to identify new insights that offer us new opportunities to target research for a cure. It was a smashing success with over 1,500 responses.