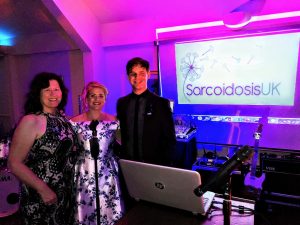 This event concluded a series of events accomplished by the family throughout 2019, with the intention of raising money for our charity in memory of their beloved wife and mother Carolyn Andrews, who passed away unexpectedly in April 2018. Husband Duncan Andrews and daughter Olivia Andrews-Allen organised the Ball, Olivia also arranged a bootcamp and completed the Richmond Marathon while sons Graeme and Scott organised a charity Golf Day.

The charity ball was an amazing event with entertainment such as a magician, a choir, a photographer and a live band to create an amazing atmosphere for all 160 people in attendance. There was also a raffle and auction with fantastic prizes that helped to increase the money raised. Our Fundraising Executive (Marcin Waszak) and Patient Ambassador (Jacqui Newton) were lucky enough to attend to represent the charity, as well as give a speech (as seen above). The event was a fantastic success which culminated the efforts of the family throughout the year and resulted in over £30,000 being raised for the charity!

Needless to say the charity is massively grateful to the Andrews Family for their tireless efforts. The impact of the money and awareness raised is immeasurable. However, with all donations being matched it will result in a colossal £60,000 being invested into research into sarcoidosis.